The uniform for Fukuyama city’s local soccer club, located in Hiroshima Prefecture, Japan, sports Manac Incorporated’s logo across the chest. This was orchestrated by Toshiya Morioka, who returned from outside Hiroshima Prefecture back to his hometown of Fukuyama two years ago to embark on a new chapter in his life at Manac. Concurrently holding posts in human resources, general affairs, and company systems, Mr. Morioka has been launching new endeavors as someone with a liberal arts background in a company of predominantly people with chemical technical backgrounds. We sat down with Mr. Morioka to learn more.

Breathing new life into Manac with a “liberal arts perspective”

After working outside his hometown region of Hiroshima Prefecture in places like Tokyo and Okayama, Mr. Morioka returned to his hometown of Fukuyama and joined Manac two years ago. While he lived in Fukuyama through graduating university, he had never heard of Manac. Those around him also echoed the same line: “Manac? Never heard of them.”

Mr. Morioka first learned about how Manac’s products are used in everyday products when he received a company overview at Manac. Both surprised and amazed by this, Mr. Morioka describes how he felt dismayed at how little-known Manac was to many people.

“I want Manac to become a household name. There must be something I can do with my liberal arts background in a company full of people with technical backgrounds.” It was with this in mind that Mr. Morioka decided to join Manac.

In January 2021, Manac signed an official partner contract with Fukuyama City Football Club (Fukuyama City FC), a Division 1 member of Hiroshima Prefecture’s Regional Soccer League. The key player behind creating this opportunity and navigating through to the contract agreement was Mr. Morioka.

There was a rise of opportunities for younger employees to actively expand into areas differing from the company’s usual duties of training and technology development. In one such opportunity, Mr. Morioka and his colleagues participated in the Fukuyama Mirai Kyoso Juku (the Fukuyama Conference of Collaborative Development for the Future), hosted by the city of Fukuyama.

Local Fukuyama companies and organizations that value community development participate in the conference with the aim to solve problems and realize projects that work to build a better future. Mr. Morioka and a representative of Fukuyama City FC first met at this conference, where they just happened to be in the same group.

The common goal to “energize Fukuyama”

“The Fukuyama City FC representative told me about the team’s passionate concept, explaining that ‘we want to energize Fukuyama through soccer,’ which strongly resonated with me.”

Manac also desired to raise its profile and strengthen activities that contribute to the community, and so were seeking out concrete approaches. The timing was impeccable as Fukuyama City FC had advanced to the 2020 Emperor’s Cup quarterfinals, and the team was in the spotlight with the match being broadcasted live nationally across Japan.

With the team uniform sporting Manac’s logo circulating mainstream and social media, Mr. Morioka says he has been hearing more people at work talking about how they saw the company’s name.

“It’s really a big deal for Manac, which isn’t all that well known in its own hometown, to be able to enter into a sponsorship deal with a team so familiar to the people of Fukuyama.”

There reportedly are Manac employees who do not mention their company’s name to friends or family since the company is not very well known. “It’s my dream to turn the company into one that makes you proud to tell your kids, ‘Daddy works at a company called Manac.’”

Mr. Morioka is working on not only ways to strengthen Manac’s image, he has a strong, passionate desire to show the excellence of Manac to more and more people.

“People usually think of rigid, hierarchical organizations when they hear about factories, but that isn’t the case at Manac. Even highly experienced colleagues in their fifties, around my father’s age, interact with younger employees like they were family. I want people to know just how welcoming of a company Manac is to work at.”

Mr. Morioka is still considering ways to spread the word to a wider audience.

“We’ve been limited to our website, business magazines, newspapers, and the like, which meant we couldn’t really reach younger people. Now we’re focusing on other platforms such as Twitter and video streaming services. I believe that raising our profile will attract more talent, leading to further growth of Manac.” 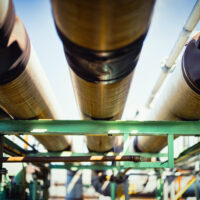 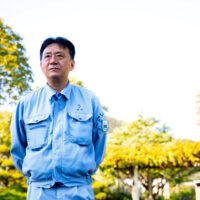 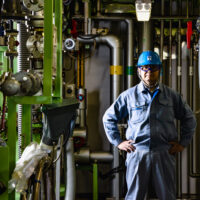 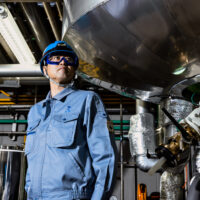